Throw in The Towel – Sports Idioms

Throw in The Towel – Sports Idioms

Have you ever felt the urge to throw in the towel after a particularly difficult day at the office? Such feelings may creep up if you feel as though you’ve taken on more responsibility than you can handle in the hopes of getting a promotion. There is also a sense of frustration over not having your opinion regarded in situations where a collective decision must be reached. During the initial stages of accent reduction therapy  it’s important to tell your accent coach about any concerns you may have. Shifting from your normal speech patterns and accent to one that is more neutral is a process that requires time and patience. The end result will be all the more rewarding knowing you didn’t throw in the towel during periods of struggle.

Idiom: Throw in The Towel

The expression “throw in the towel” is used to signify that someone has officially given up. In a sporting context, a coach may throw in the towel towards the end of a lopsided loss by taking key players out of the line up . It is viewed as a universal sign of resignation and/or failure

Nobody expected him to throw in the towel and officially resign from the election, but it was the wisest thing to do at that point because he had lost the respect of his peers. 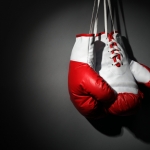 Origin: “Throw in the towel” is an expression that comes from boxing. If a corner finds that their boxer is getting beat up and have no other way to recover, they literally throw a towel into the center of the ring as an act of concession. What could possibly be the oldest citation of the expression in existence comes from a statement in a 1913 issue of The Fort Wayne Journal, where it was written, “A towel was thrown from Burns’ corner as a token of defeat”.

After this, “throw in the towel” started to take on a more figurative meaning and was applied to things unrelated to boxing. A 1916 novel called The Moods of Ginger Mick by Clarence James Dennis featured the phrase, “I’ve done me a limit, and tossed in the towel”.

Throwing in the towel actually had a precedent, which was throwing in the sponge. As early as the 18th century, sponges were used as a ringside accessory.