Accent Bias on Rate My Professors

Home/Living in America/Education/Accent Bias on Rate My Professors

Accent Bias on Rate My Professors

In professions where speaking is the primary form of communication, the tendency for accent bias to develop to various degrees amongst a speaker’s audience is inevitable. It is an unfortunate reality for foreign born business executives, teachers and CEO’s, who must work harder than their American counterparts when speaking to get listeners to look beyond the possible biases and prejudices they may have to see them as being well versed in their area of expertise. Discrimination against an individual may occur for a number of reasons unrelated to one’s accent, but the fact remains that many will judge whether someone has the capacity to do their job properly based on accent alone.

Students Rate their Professors Based on Clarity

This theory is supported by data gathered from the website Rate My Professors, which allows college students to leave reviews about their professors and rate them in the categories of “helpfulness”, “clarity” and “easiness”. These ratings are then used to calculate an average overall score for the professor that site visitors can view at a glance, helping students make final decisions 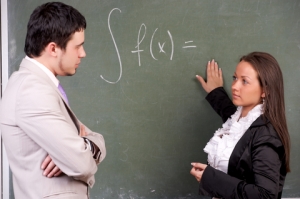 about which professors to take when enrolling in semester courses.

Intrigued by this data, Nicholas Subtirelu, a linguistics graduate student from Georgia State University, undertook a comprehensive study that revealed math professors with common Korean or Chinese names at American universities have been getting considerably lower scores than other educators on the website. Especially in the category of ‘clarity.’ Looking through the student comments attached to the professor ratings, Subtirelu searched for keywords such as “accent, “English”, “language”, and “thick”. Many students mentioned the speaking ability of their Asian instructors, suggesting that some students with Asian instructors can’t get beyond the presence of a heavy accent and use this as an excuse for not trying to fully engage with the material being taught.

Subtirelu reviewed ratings given to over a thousand math professors who had last names suggestive of a Korean or a Chinese background and compared it with the results of those with American names. He found the following results:


(Based on a 4 point scale, with 4 being the highest possible rating)

As you can see in the chart above, students in the southern portion of the United States found professors with American sounding names to be profoundly clearer compared to those with Asian sounding names. Assuming this discrepancy is primarily based on accent bias on behalf of the student reviewers and not a reflection of the professors’ ability to teach, Subtirelu believes universities should impart a message upon their student body that they must be willing to adapt in a class taught by a foreign professor with a noticeable accent, whether this means asking specific questions for clarification purposes every lesson, focusing intently on what the professor is saying and not how they are saying it, sitting closer to the instructor in a lecture hall to improve one’s ability to hear the material, etc. It might be the case that a professor has an accent, but this should never be used as an excuse for why a student struggles with, or fails outright, a particular class. Students must bear the majority of the responsibility for their education at the college level.

What Drives Accent Bias on Campuses?


Subtirelu decided to investigate further and check if accent bias was indeed present on some of the college campuses referenced in his study. Sitting in some of the classes as an observer, he actually found that the professors who scored poorly did have an accent but were still able to present the subject clearly. Subtirelu believes some students have a tendency to tune out professors with any kind of accent, no matter how severe.

This group of people assumes that because the instructor has an accent, they will be difficult to interact with and don’t have a thorough understanding of what they’re teaching. Thus, one small assumption about an instructor’s accent can lead to associations with other negative stereotypes (accent bias) and ultimately impact how much effort they put into the class.

Subtirelu fears that college students may be engaging in a form of avoidance behavior: signing up for classes with professors and teaching assistants without a noticeable accent. Either because they have a bias against a particular accent, or they believe that an instructor with an accent will be harder to understand, thus they avoid them altogether. Colleges across the US must work with students to ensure accent bias doesn’t become a widespread problem throughout the educational system.