How Americans Got Their Accents

Home/Accents and Dialects, Foreign Accents, Living in America/How Americans Got Their Accents

How Americans Got Their Accents 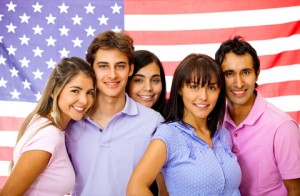 The American accent began to develop quickly after America won the Revolutionary war against the British. Until that time, both parties spoke with a rhotic British accent similar to the modern day American Accent.

Difference Between Rhotic and Non-Rhotic

Rhotic accents pronounce the hard /r/ sound at the end of words such as “car”, and all other places in which the letter

[r] appears in each word. Non-rhotic accents do not emphasize this sound unless it appears at the beginning of a word or when followed by a vowel.

The upper class, in Southern England, initiated a movement which permanently changed the standard British accent by speaking in a non-rhotic manner.  This gained universal acceptance among Brittan”s high society and infiltrated regional dialects. The majority of American Accents retain their rhotic quality.

What Dialects Started the American Accent

After the United States won independence from Britain, American Accents emerged in the 1700″s combining British English, non-English language phrases and slang terms to create four distinct dialect regions. These include – The Puritans, Royalists, Quakers, and The Scots-Irish.

The Puritans maintained a level of respect for British English; therefore, the New England American dialect and its New York variation are characterized by the pronunciation of caught and bought with an O instead of an A, and an avoidance of the letter R when it is found at the end of words, similar to non-rhotic British speech.

America”s first generation of children spoke with an accent and dialect heavily influenced by their parent’s speech patterns. In modern society, a child”s accent develops first from influence from their parents, but more so by their local classmates, friends, and regional American dialects which have evolved since the 1700’s. There are numerous examples of children born in the United States who develop an American accent despite influence from parents who speak English with a foreign accent.

Research indicates there are between three and twenty-four officially recognized American dialects, although many of the small towns and communities within each dialect region have attributes unique to itself.

If you want to learn the standard American accent and you speak with a foreign accent you may want to consider private accent reduction training.  It will provide you with individualized attention as well as the tools, guidance, and feedback you would need to speak with the most neutral American accent.