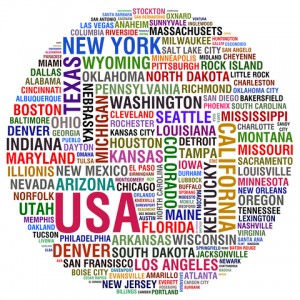 Linguists divide the U.S. Map into four distinct American accent regions, each with a corresponding American dialect: the inland north, midland, or northern region, the south, and the west, according to respective vowel shift patterns–the Northern cities shift, the Southern shift, and the western low back merger.

The cot/caught vowel merger causing both of these words to be pronounced similarly in the western and eastern part of the country has not completely taken hold in the Midwest, where each sound is distinct. This is an integral feature present in the Northern cities vowel shift as it continues to progress along the east coast of the country, thus preventing  the merger from becoming universal across all American dialects.

Did Europe Influence the American Accent?

Both the New York and Boston American accents are influenced by received pronunciation of the non-rhotic British accent. Therefore the

[r] sound is dropped at the end of all words in which it appears unless followed immediately by a vowel.  These dialects also add an intrusive r when a word ending in a high vowel is followed consecutively by a vowel.

If you want to learn the standard American accent and you speak with a foreign accent you may want to consider private accent reduction training.  It will provide you with individualized attention as well as the tools, guidance, and feedback you would need to speak with the most neutral American accent.