If you were to scan the playlist on your personal music player, paying  attention only to how clearly the lyrics are pronounced in a given song, you’d be surprised to note that, irrespective of factors such as genre, musicianship, vocal style and melody, a singer’s native accent normally isn’t obvious when singing. Even artists who were born outside the U.S. can give the impression they are from America by singing in an accent free  voice akin to the standard American accent seen in the Midwest. However, when musicians such as Eric Clapton and U2 front man Bono are interviewed, their respective English and Irish accents become apparent. The explanation for the loss of accent occurring in the transition from speaking to singling lies in the articulation of vowels. Singing naturally causes the pharynx to widen and allow more air to enter, thereby rendering vowels  present in high notes free of linguistic traits. 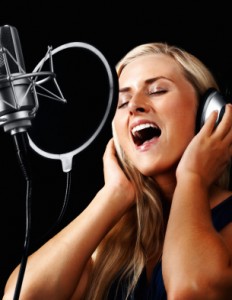 Melody is the most important aspect of a song in that it draws a listener’s attention when they initially hear a song and serves as the vehicle through which the song’s message is conveyed. If a listener finds a melody interesting, they are more likely to overlook any inherent flaws. Singers often subconsciously reduce their accents to suit the melody and rhythm of a song, resulting in American singers frequently dropping the “r” sound when it appears at the end of words and a non rhotic form of pronunciation.

While some singers may drop their native accent for aesthetic purposes, British rock stars from Elton John to The Rolling Stones’ Mick Jagger have made  a conscious effort to nullify their native accents and increase the potential marketability of their music by singing in the style of their biggest American influences.

A slight accent can go a long way

The work of London artists such as Lilly Allen and Ian Dury has garnered worldwide sales and critical acclaim despite both singers retaining their native accents, which would  appear to run counter to the “melody is the dominant force in music and thus supersedes  native pronunciation” argument above.

Singers who choose to retain their native accent can lend their songs an authenticity that would otherwise be lost to their audiences. Indeed, Paul McCartney of the Beatles worked tirelessly to sing in an American accent before ultimately deciding it was too cumbersome. Consequently it is difficult to listen to a song such as Penny Lane, sung in a Liverpool accent that features a rounded “o” sound in  “customer” when describing the barbershop scene, and imagine it being sung any other way, as the accent is integral to the song’s “about town” feel.

In the case of country music, established conventions of the genre mandate that all singers adopt a light to heavy southern accent when singing, thus complying with the expectations of their audience. Whether they are missing or prominent, accents play a large role in our aesthetic appreciation of music as well as how we feel about particular artists.