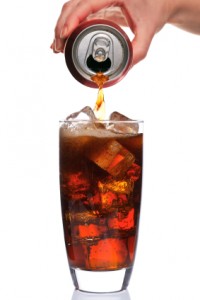 The long awaited dispute of what is the ‘right’ way to say a sweetened carbonated beverage is in, finally. Could it be soda, pop, or coke? And the answer,according to one graduate student’s American dialect research is:

All of the above! That is, depending on where you are in America-due to one’s American dialect they speak. You can thank the statistics graduate student, Joshua Katz, at North Carolina State University for putting all of the American dialect confusion to a rest. Joshua has created 100+ maps of different lexical and phonological phenomena in English.

Those different lexical and phonological occurrences are created by the use of a different American dialect based on certain regions across the U.S. According to dictionary.com, a dialect is “a variety of a language that is distinguished from other varieties of the same language by features of phonology, grammar, and vocabulary, and by its use by a group of speakers who are set off from others geographically or socially.”

The grad student’s main focus was to use an American dialect based on his geographical location.

Using the sweetened carbonated beverage example of American dialect, one can clearly see that the majority of the northern part of the country (excluding Northeastern states) prefer the use of the word ‘pop’. The “soda” users tend to fall into the East and West coast and in the Southern Illinois/Missouri area. Last but not least, is the least common, ‘coke.’ To seem like a true native, use this term in the Southern region of the U.S.
Fun fact: Opposite the American dialect, the people in the U.K. call a sweetened carbonated beverage a ‘fizzy drink’. 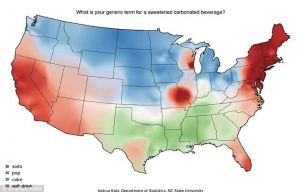 With this information, perhaps you can possibly fool a Michigander into thinking you’re a native by using the word ‘pop’? If not that, at least not stick out like a sore thumb by order a ‘coke’.

As previously mentioned, there are over 100+ of these American dialect maps! Maps include examples such as these:

For example, the word ‘been’ can change in sound by either using the

[I] vowel, like in ‘sit’, the [ɛ] vowel, as in the word ‘set’, and the [i] vowel, in ‘see’. The consensus is that ‘been’ uses the vowel [I]. There are select northern regions, especially in Michigan and Wisconsin, that use the option [ɛ]. 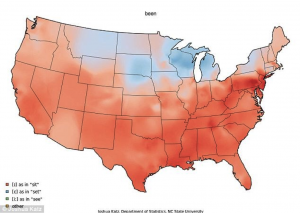 Other American dialect phonological examples include: