Accent Reduction: Knowing the Idioms of the English Language-Part 16

Example Sentence: This year’s hockey championship will be an acid test for your team’s abilities.

Origin: The term’s origins come from chemistry. Initially, the acid test referred to the prospectors used in California Gold Rush for the purpose of identifying gold. It’s a known fact that gold doesn’t react with most acids, unlike other base metals, but does react when subjected to aqua regia, a combination of nitric and hydrochloric acids. The acid test had the role of confirming that miners’ findings were indeed represented by gold and not just laborious imitations. The term was first used in “The Burlington Hawk-eye” paper, which dates back to 1877, during the mid-gold rush. It referred to a gold coin of the right weight and proportions which was able to withstand the acid test. 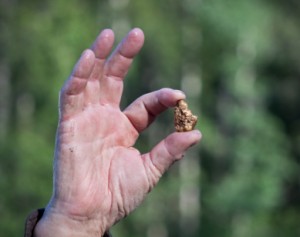 Idiom 2: A Flash in the Pan

Definition: Something which has the ability to impress but doesn’t bring any long-lasting results

Example Sentence: Mayor’s plan of enhancing air quality was just a flash in the pan.

Origin: Centuries ago, flintlock muskets used small pans for storing their charges of gunpowder. Every time a musket was fired but the bullet failed to discharge, the situation was regarded as a flash in the pan. The term has been brought in market ever since the end of the 17th century. In her book, “Reflections on Several of Mister Dryden’s Plays”, Elkanah Settle noted that if canons were bred to such extent as to only flash in the pan, than Mr. Dryden simply had to venture into the sea.

Idiom 3: Out of Steam

Definition: Exhausted, given up

Example Sentence: After running all across the yard to catch the cat, Mary found herself to be quite out of steam.

Origin: The term dates back to the period when steam engines were massively used in America. When there boiler failed to induce enough steam pressure, the engines would slow down and ultimately stop, thus being regarded as out of steam. The first term occurrence was in the 1898 edition of “Perry Daily Chief”, a newspaper distributed in Iowa. The article inside the newspaper described the author as chasing a girl in the hope of her running out of steam, although the results failed to appear. 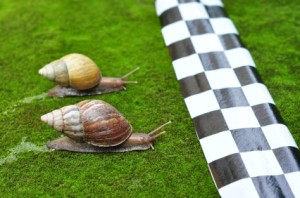 Snails running out of steam…

This is part 16 of our American Idiom series that can help improve your knowledge of the English language. Along with this, AccentPros can also help you improve your American accent with our accent reduction services. If you haven’t started already, check out our free accent screening and our office or online accent reduction programs! For more information, follow us on Twitter, like us on Facebook , join us on Meetup and connect with us on LinkedIn!