Warning: Use of undefined constant mc_ps_parse - assumed 'mc_ps_parse' (this will throw an Error in a future version of PHP) in /home/customer/www/accentpros.com/public_html/wp-content/plugins/parse-shortcodes/parse-shortcodes.php on line 16
 Learn to Speak English: Accents in Advertising Part 1 - Accent Pros Skip to content

A recent trend in advertising that is gaining momentum is the use of cartoon and CGI characters to sell various products. Research has shown animal characters connect more with audiences than a human spokesperson, acting as a kind of intermediary between the company and customer. Early examples of successful cartoon animal pitchmen include the Tootsie Roll owl and the CoCo Wheats duo of Perry, an young child, and Pepper, his pet bird. The running gag in the commercial centers around the bird’s constant mispronunciation of “coco” as “Cuckoo wheats”, before an enraged cuckoo bursts out of the clock and screams, “It’s coco wheats, bird brain! Coco wheats!”

As a person who is just starting to learn to speak English you are no doubt familiar with how TV characters with accents frequently have their speech patterns parodied for laughs. They may exaggerate particular sounds, consistently mispronounce one word, or completely confuse the meaning of specific words, which is intended to have humorous consequences within the plot of the episode.

On the other hand, human or cartoon character commercial pitchmen with accents seem to be viewed as credible  by the American public. The accents themselves convey a sense of sophistication and dignity. Although many learn to speak English through television, commercials are often ignored. The next time you turn on the TV, take note of how often commercials feature a cartoon animal as the one attempting to see a product while also identifying any accents present. Assimilating yourself to a number of American dialects will allow you to learn to speak English more quickly than sticking with a single approach.

Learn to Speak English: The Product is in The Accent

The Geico gecko has become such an ingrained part of international culture that it’s hard to believe there was a time when the gecko didn’t embody the Geico brand. Interestingly the gecko was born out of necessity when a 2000 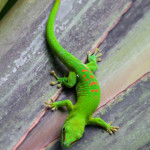 Actors Screen Guild strike prevented the use of live actors.  Geico’s president of marketing initially didn’t see the appeal of the gecko but any doubts he had about the character were quickly put to rest when the company started to take off both financially and as a brand in 2002, selling nearly 7 million insurance policies over a four year span. The gecko’s original voice was provided by Kelsey Grammer, who delivered his lines in a standard British accent. Subsequent ads featured a rotating cast of actors who all gave their best interpretation of the gecko. Accents that ranged from BBC English to Australian. The exact origin of the gecko’s accent remained a mystery to viewers and those who attempted to mimic the gecko in order to learn to speak English. It was revealed that actor Jake Wood had been selected as the permanent voice of the gecko . Contrary to popular belief the Gecko’s accent is considered English Cockney, a dialect associated with the working class people of London, specifically those who were born in the neighborhoods near St. Mary-le-Bow’s church.