Warning: Use of undefined constant mc_ps_parse - assumed 'mc_ps_parse' (this will throw an Error in a future version of PHP) in /home/customer/www/accentpros.com/public_html/wp-content/plugins/parse-shortcodes/parse-shortcodes.php on line 16
 Keep the Ball Rolling - Idiom - Accent Pros Skip to content

Imagine for a moment you are sitting in your cubicle at work and you overhear a conversation: should the company continue to sell to the same consumer base, thus ensuring a marginal profit or should they try to go after a different demographic? Due to the inherent risk and weight of this decision, expressions such as “keep the ball rolling” are being thrown around. Do you actually know what this term means? The origin behind it? In today’s competitive business environment you must have a working understanding of the business jargon related to your industry, or else you risk being taken advantage of. Read on to increase your general knowledge of American business idioms

To maintain a level of activity or enthusiasm for a certain project, even in light of unexpected hardships 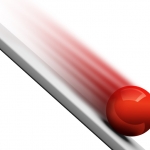 Just because the rest of the team members are gone does not mean that we shouldn’t keep the ball rolling, as we’ve been working on this far too long to give up now.

A British phrase “keep the ball up”, which is not really being used any longer, serves as a precedent for the American expression “keep the ball rolling”. As for the earlier expression, it conveys a form of continuous activity as one tries to keep a ball suspended up in the air. It was Jeremy Bentham who first used the expression in a 1781 letter to George Wilson, where he said, “I put a word in every now and then to keep the ball up”.

As for the more commonly used American version, it was first used in the 1840 presidential elections. This election marked the start of the use of different campaign paraphernalia, which includes the use of campaign songs. It was then General William Harrison that had a song that said, “That swift the ball is rolling on, for Tippecanoe and Tyler too”. His supporters then proceeded to roll a literal victory ball made of tin and leather from one rally to the next, chanting “Keep the ball rolling!”