Warning: Use of undefined constant mc_ps_parse - assumed 'mc_ps_parse' (this will throw an Error in a future version of PHP) in /home/customer/www/accentpros.com/public_html/wp-content/plugins/parse-shortcodes/parse-shortcodes.php on line 16
 Chinese Whispers - Gossip Idioms - Accent Pros Skip to content

We’ve all been there. You hear an exciting bit of office gossip and immediately begin to think of not only who you’re going to tell it to first, but how you’re going to tell them. E-mail? Text? Tweet? Direct Message? With the explosion of social media and texting services available to us in this current age, there seems to be an obligation to share information with people, regardless of whether our audience wants to hear what we have to say or not. It is not surprising then, when a simple bit of gossip becomes more distorted and embellished the longer it is passed around, destroying reputations with uncompromising force. Sometimes it is better to ignore the Chinese Whispers and just focus on your day to day work. 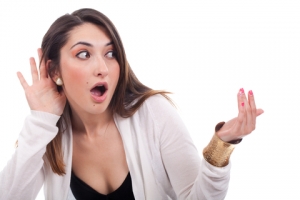 The idiom “Chinese whispers” is used to describe an inaccurately conveyed piece of information, story or gossip. The information usually becomes distorted as it is passed down from person to person, with each individual more likely than the last to embellish the facts as they were originally told to them and put their own unique spin on the latest rumor or slice of gossip circulating around a group of friends or colleagues. Once the final version of the information in question is accepted as fact, it bears little resemblance to the truth.

Example: “The multi-awarded actress dismissed the recent pregnancy rumors as nothing more than Chinese whispers.”

Origin: “Chinese whispers” is a relatively new phrase. Its first citation was only recorded in 1964. The expression is commonly used in conversations in the UK and in other English-speaking countries, although not so much in the US. Chinese whispers originated from the party game with the same name in which one contestant whispers a message to his teammate until it’s progressively passed on to every member of the team. In the US, this game is commonly called as Telephone.