The prospect of changing your speech to speak with a reduced accent may seem like a daunting task. This can leave you open to self doubt about whether you are betraying a part of your identity by making such changes. You can counter any fears you may have by reminding yourself that you are in control of the accent reduction process. You can proceed at your own pace while monitoring when and how you incorporate learned techniques. You must avoid getting into a “Mexican standoff” with your accent and be willing to make the recommended changes to your tone, speaking rate, and vocabulary when appropriate.

How often have you come across the idiom below in conversation and/or print?

A Mexican standoff is a confrontation between two parties where it seems that neither will win. Neither would usually want to attack first out of fear of how the other would retaliate, but neither would want to back out or lay down their arms either in fear that the other would take advantage of the situation. 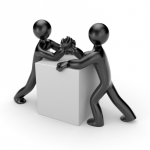 If this movie ends in a Mexican standoff, then I’m not going to waste time watching it.

There is no clear origin of the expression Mexican standoff, although a few ideas have been thrown around.
One common explanation is that this is another case of regional chauvinism where Americans consider themselves to be better than Mexicans. Face off two American cowboys and you’ll expect them to have guns drawn out in no time, trying their best to shoot the opponent. In the narrative constructed by some Americans however, Mexicans would not have the guts to do this,. They would just stand there waiting for the other party to make their move instead of proactively starting the fight.

According to the Cambridge Advanced learners Dictionary, the phrase may be Australian in origin, although this claim has been unsubstantiated. It is now viewed as a common device in plot device in films and novels where the hero and villain face off in a fight to the death following escalating tensions throughout the story.