Warning: Use of undefined constant mc_ps_parse - assumed 'mc_ps_parse' (this will throw an Error in a future version of PHP) in /home/customer/www/accentpros.com/public_html/wp-content/plugins/parse-shortcodes/parse-shortcodes.php on line 16
 Pardon my French - Conversational Idioms - Accent Pros Skip to content

In today’s idiom post we are going to be examining the meaning and origin of the phrase “Pardon my French.” A common variant of this phrase is “Pardon my Language”, but they have identical meanings. Occasionally this phrase is used within a conversation whenever a person has said, or is about to say, something that the other party may find offensive. It is a way for the speaker to indicate that they are aware what they are about to say could be interpreted as in poor taste, but they are willing to risk this in order to make their point.

Idiom: Pardon my French or Excuse my French

When someone says “Pardon my French” or “Excuse my French”, someone is trying to apologize for swearing or for saying something that other may see as inappropriate.

He’s a bloody sight better than those other youngsters out there, pardon my French!

The phrase was first commonly used in the mid-20th century. It is English in origin. The first version used the more formal tone “Pardon my French”, and it was not until around 1940 when the 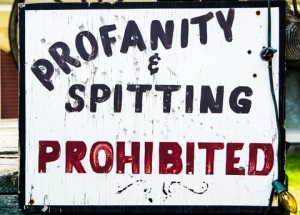 switch was made and people started saying “Excuse my French” more often.

In the 19th century, people were fond of using French words as part of their statements. This could be because of how classy the language sounds, and it could also be because some French words have no literal English translation. When caught using a French word, people would often follow it up with “Pardon my French”.

There also used to be constant warfare between the English and the French, so a lot of things that were considered as French in nature were considered as indecent. As such, people often apologized for doing something that was “French” such as swearing or kissing passionately in public.