Chicago Accent: The Birth of a Stereotype

On January 12, 1991, Saturdayy Night Live (SNL) debuted a recurring skit known as Bill Swerski’s Superfans, which would come to define the so called “Chicago accent” for generations of non-native Chicagoans. The accent used in the skit continues to be bandied about to this day as a shorthanded representation of how the majority of Chicagoans speak.  This is despite the fact that the actors appear to revel in purging their minds of anyone or anything that interferes with their inexplicable devotion to the Chicago Bears National Football League (NFL) team. Surprisingly, the exaggerated Chicago accents they employ are somewhat accurate according to George Mason University linguist, Corrine McCarthy.

Similar to the New York accent, a prominent Chicago accent uses a “d” sound in place of “th”, as in the Superfans repeated refrain of “da Bears.” As the skit suggests, this vocal trait is more commonly seen among older, white working class speakers.  Due to the skit’s enduring popularity and its status as being the epitome of the Chicago accent, the radio show Curious City and McCarthy worked in conjunction to identify the unique linguistic markers that separate the Chicago accent from other regional dialects and whether the Chicago accent will live on in future generations. Superfans themselves are obvious caricatures on Saturday Night Live, but we will wait to see if this accent feature will endure over multiple generations. 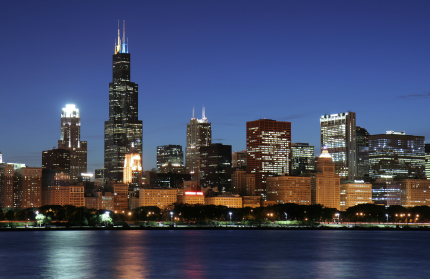 
Linguist Corrine McCarthy created a passage of text called Too Hot For Hockey interspersed with words deliberately chosen as being representative of any one of 5 pronunciation traits common to the Chicago accent: an “o” sound pronounced in words like “nachos”, “hot” and “pop,”  a raised  uh sound pronounced near the back of the throat, substituting  a “d” sound in place of “th”  (daa Bears), and the caught/cot merger, wherein the speaker does not clearly differentiate between two distinctly different sounding words.  Of the 361 Chicago based speakers who participated, only 8 speech samples contained all five Chicago speech characteristics while 111 contained three traits, suggesting that although the Chicago accent as depicted in the Superfans sketch may be more of a comedic exaggeration than reality, all Chicago accents exhibit some elongation of vowels, including a raised /a/ sound that causes words with a middle /a/ sound to have an “eah” ending . Thus the word “stop” is pronounced as something akin to “steep”, while the short “o” sound in specific words is replaced with a long “a” (/e/) sound. These vowel shifts are a product of Chicago being in the inland north dialect region that stretches roughly from Milwaukee to Buffalo.


If you find yourself regularly pronouncing words which begin with an “o” or feature an “a” within the first syllable with a fronted “o” sound, you may benefit from Chicago accent reduction training.  Accent reduction specialists emphasize a manner of speaking considered Standard American English.  Throughout training, you will gradually learn when it is appropriate to code switch between the Standard American accent and one that incorporates raised “o” and “a” vowels for situations where you believe a  business client may be swayed to accept a business proposal if the message is delivered in a casual manner that mirrors their own speech. This technique is referred to as pacing and allows two individuals to begin to form a connection.