Learn to Speak English: Which comprehension techniques work best for you?

If you have just discovered AccentPros and are eager to learn to speak English by dedicating yourself to one of our many programs, you may be uncertain as to which techniques will yield the best results. Some people are able to learn to speak English strictly by watching TV. Conversely there are those who can completely immerse themselves in a language through reading and quickly possess the vocabulary of a native speaker, thus leaving them well equipped to handle any speaking situation.

Although it is important to encounter English in both the written and spoken form, one should not dismiss the role online video can play in the process when you learn to speak English. Entering language related search terms into a video sharing site like YouTube will allow you to instantly study the language and behavior of native English speakers in a given speaking situation. A search of this type will inevitably yield scenes from current and former sitcoms with characters facing difficult speaking situations. 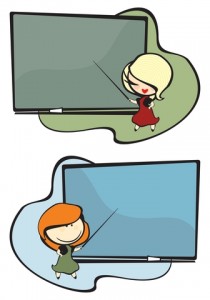 Learn to Speak English: Is Mind Your Language reflective of real life?

The British sitcom Mind your Language, which aired from 1977-1986, features Barry Evans as language instructor Jeremy Brown and his attempts to help a classroom of foreign students from all over the world learn to speak English. The show was criticized at the time for its stereotypical humor and exaggerated accents. For every proponent of the show who claims it shows people trying to pursue their dreams as they learn to speak English, it could be argued just as easily that since the students don”t appear to be making progress, the idea that they are in the classroom to learn is questionable at best.

Whatever the show”s intentions regarding its characters, those who are beginning to learn to speak English will relate to some aspects of the show.

In this scene, student Giovanni Capello is left in charge of Jeremy Brown”s class while Brown is out of the room. Notice that while the students understand and speak English well enough, they have trouble defining the grammatical parts of English and synonyms, as when Ali responds to the question, “What is a noun?” with “a lady who is living in a convent.” Juan, on the other hand, misinterprets Giovanni telling him about a “herd” of cows, saying emphatically “Sure I”ve heard of cows!”

This exchange highlights the importance of having an extensive mental database of synonyms for commonly used English words. Being able to explain what you mean using your own words and not strictly repeating what is said back to you will be easier on your listener. It will also help you avoid sounding as though repeating yourself in situations where your listener doesn”t immediately understand what you are saying.