Warning: Use of undefined constant mc_ps_parse - assumed 'mc_ps_parse' (this will throw an Error in a future version of PHP) in /home/customer/www/accentpros.com/public_html/wp-content/plugins/parse-shortcodes/parse-shortcodes.php on line 16
 How to Speak English: Bird Accents - Accent Pros Skip to content

How to Speak English: Bird Accents

How to Speak English: Bird Accents

How to speak English: Animal Speech

Parrots are known for their perceptive nature and ability to pick up on human languages rather quickly. What language a parrot eventually speaks, and the rate at which they pick up this language, directly relates to the amount of exposure to a specific language, dialects, or unique speech mannerisms. Similar to humans who wish to learn how to speak English and modify their accents, birds vary the delivery of their message to fit their surroundings.

According to University of Melbourne urban ecologist Dr. Kirsten Parris, birds living near roads with high density traffic use a higher pitched call to be heard over the competing noise, which at times makes it difficult for them to attract a mate. Different bird species also develop unique accents and dialects.

Parris notes, “When a baby bird is born it doesn’t know how to sing, it learns to sing from listening to other birds around it.”

How to speak English: Looking to Fit In

Parris has also found that birds’ “accents” gradually shift over time. It seems that a cohesive “language” can only develop within groups of birds that have been together for an extended period.

Birds who suddenly abandon a flock they’ve adopted only to come back later have been noted to sound different than those birds who have remained part of the original group. The same phenomenon can be seen in the workplace with different cliques of people which are reluctant to permit outsiders, such as those who are learning how to speak English, until these people prove they have something to contribute to the group.

How to Speak English: Nigel the Parrot’s Journey

Nigel, an African grey parrot, disappeared in 2010, having been raised by owner Darren Chick in Torrance California and speaking a version of Chick’s British accent. When Nigel was reunited with Chick in October 2014, Chick was stunned to discover that Nigel spoke Spanish.

Nigel first reappeared at the Torrance based Happy Trails Dog Spa owned by Julissa Sperling. Although Sperling grew fond of the bird’s tendency to sing and dance and mimic the barking of dogs at the spa, she felt compelled to see if Nigel could be a missing bird. Veterinarian Teresa Micco initially believed Nigel to be her own lost African grey parrot given its yellow eyes and ornate red tail. Micco used a scanner to check for a microchip which, although present, was not registered to an owner.

A paper trail kept by the pet store that originally sold Nigel led Micco to Chick’s doorstep. Shortly after the original story went viral the surrogate family that Nigel had escaped to came forward asking to be reunited with their 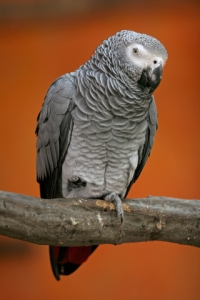 pet. Nigel had been bought for $400 at a garage sale in 2010 by the grandparents of the Hernandez-Smith family, who also lived in Torrance and knew the bird as “Morgan.”

The elder Ruben Hernandez was born in Guatemala and spoke mainly Spanish when interacting with the bird. Not only did “Morgan” learn a variety of Spanish phrases, he also learned part of the theme from “The Good, the Bad and the Ugly”, the names of Hernandez’s dogs, and how to imitate the sound of a barking dog.

All of this evidence would seem to indicate parrots only retain the rules of the language they have most recently been exposed to. “Morgan” did not recognize his original owner Daniel Chick when the two were reunited and made no attempt to speak English when in Chick’s presence.

A relevant question for accent coaches to consider is: can a parrot aid a person learning how to speak English in code switching between their native language and English?