Imagine for a moment you are sitting in your cubicle at work and you overhear a conversation: should your company should continue to sell to the same consumer base, thus ensuring a marginal profit, or try to go after a different demographic? Due to the inherent risk and weight of this decision, expressions such as “ace in the hole” are being thrown around. Do you actually know what this term means? The origin behind it? Read on to find out.

Idiom: Ace in the Hole

Definition: Something that can assume as a sure victory; something important held in reserve; a hidden advantage or resource

Example: They may think that they’re ahead of the technology race, but I’ve got an ace in the hole that could wipe them out in the end. 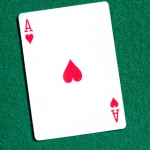 Origin: The term ace in the hole was used as a title of a film shown in 1951, which starred Kirk Douglas. In the movie, Douglas’s character decided to delay the big rescue until the very end so that he could have exclusive rights to every piece of information that comes with the newstory in the main plot, allowing him to enhance his own personal stature and.

This is the same concept that the term ” ace in the hole” embodies. It originally comes from the game of poker, where a ‘hole card’ is used to describe the card dealt face down and kept hidden from everyone else. Of course, knowing that the ace is considered as the highest card in the game, having an ace as a hole card would exponentially increase one’s chances of victory .
The earliest citation in print comes from a 1986 issue of The New Era, a newspaper in Iowa.