Warning: Use of undefined constant mc_ps_parse - assumed 'mc_ps_parse' (this will throw an Error in a future version of PHP) in /home/customer/www/accentpros.com/public_html/wp-content/plugins/parse-shortcodes/parse-shortcodes.php on line 16
 Ball and Chain- English Idioms - Accent Pros Skip to content

If you’ve ever had a friend who finds themselves in the beginning stages of a relationship, you know all too well how tiring it can be to listen to them drone on and on about “lovely” things that their significant other does. Such as, the way they laugh, never give up on the Sunday crossword until it’s completely finished, or text them to ask how their day is going. More often however, you’re likely to hear friends complain that their significant others have become like a “ball and chain”, preventing them from achieving personal and professional goals. Thanks to AccentPros, you no longer have to think of an accent as a “ball and chain.”

The term “ball and chain” is often used in two different ways. One is to signify a special burden in one’s life, while the other is a jocular way of referring to one’s wife.

Example:
He has often complained about the old ball and chain waiting for him at home, but you can see with the way his eyes light up that it’s just his way of joking around and that he truly cares for her. 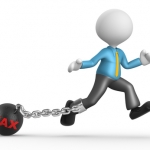 The use of a ball and chain was used as early as the 1800’s to restrain prisoners. Made of heavy metal, the ball is secured to a prisoner’s leg through a manacle and chain. The first appearance of the term in print was in 1819 on an issue of The Times, where it was written, “They sentenced the prisoner to receive 50 stripes on his bare back and be confined to a ball and chain in hard labor.”

As it was seen as a form of restraint, it was eventually used to describe similar scenarios in life where one is prevented from doing what he wants to do. One such popular scenario is having a strict wife, as wives are often considered by men as the person who is holding them back and preventing them from doing the things that they really want to do. Especially whenever they have free time.