A Diamond is Forever-“Stone” Idioms

A Diamond is Forever-“Stone” Idioms

We conclude our series on American idioms featuring or relating to the word “stone” today with the idiom, “a diamond is forever.” This phrase is most notably associated with De Beers thanks to a copywriter named Frances Gerety, who in 1947 came up with the advertising slogan “A Diamond is Forever.” It has since been used as the inspiration for the title of a  1971 James Bond film, as well as countless songs. It is not an exaggeration to suggest the concept of the diamond as a symbol of lasting commitment has become a preeminent force in American culture.

Idiom: A Diamond is Forever

The saying “a diamond is forever” circles on the idea of longevity and permanence. Since it’s a fact that diamonds are indestructible, they can literally last for a very long time. Thus, diamonds are associated with the concept of eternity.

Example: “He gave her a diamond engagement ring because a diamond is forever, and so is his love.”

Origin: Contrary to what many believe, the concept of the phrase “a diamond is forever” wasn’t originally created by De Beers, a renowned mining company that primarily deals with diamonds. 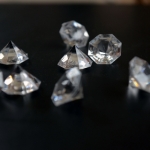 The phrase was first noted in the 1925 book by Anita Loo entitled Gentlemen Prefer Blondes. A line in it stated that “… kissing your hand may make you feel very, very good, but a diamond and saffire bracelet lasts forever.” It wasn’t until 1947 when De Beers used the phrase as the company’s advertising slogan for their fall campaign. The marketing catchphrase was such a hit that it eventually became the official slogan of De Beers’ Group of Companies.