George Carlin is widely considered to be one of the greatest stand up comedians of all time, alongside other  giants of the medium such as Bill Cosby, Richard Pryor and Bill Hicks. Any of the aforementioned comedians could be argued as the greatest of all time, but it would be impossible to definitively state one comedian as being the greatest ever. What cannot be argued is that the unique way in which all of these comedians used language contributed greatly to their comedic persona and the message they were trying to convey.

The message varied. Cosby excelled at telling exaggerated stories from his childhood that revealed just how little control parents had over their child”s imagination, while Pryor and Hicks boldly pointed out the hypocritical nature of society, with Pryor paying particular attention to racial and culture differences.  Watching or listening to well performed standup comedy can be an intriguing way to learn to speak english. Not only is it entertaining, but comedians often speak in a direct way  free of the idioms and unusual phrases that often confuse non native speakers of English. They also include a fair amount of slang and jargon used in proper context. Overall the language used is closer to conversational English than the speech you find used in language learning workbooks or the accent reduction software some people use to learn to speak english. 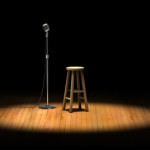 A lifelong fascination with the English language led George Carlin to include comedic bits about the way humans use language in his act during every point in his career. Frequently Carlin attacked euphemisms or idioms in American English, which he referred to as “soft language” that  “takes the life out of life”.

As a non native English speaker who is using every possible resource to learn to speak english, someone calling idioms and euphemisms “soft language” may seem odd. After all, society teaches us the use of euphemisms is a form of politeness and is perfectly acceptable, when you learn to speak english. However, consider the idea that idioms, in and of themselves, are really just creative, socially acceptable euphemisms. Whereas euphemisms are frequently employed by speakers when discussing a topic that others may find offensive, such as politics or religion, idioms are used to put a creative spin on terms or ideas that have been brought up in conversations so often they have become cliché and therefore have to be talked about in an unusual way for a listener to take notice.

Below is an incomplete list of idioms mentioned by Carlin in the routine. The explanation is listed second.  As you learn to speak english, can you think of any idioms you were recently confused by?

Takes the cake- The best possible example of something. “Lucas really takes the cake when it comes to bowling.”

Down the tubes-Used when something goes badly. That ball game really went down the tubes after the sixth inning.

More than happy- Expresses an eagerness to do a favor for someone. “I”d be more than happy to get your mail while you”re on vacation.”

learn to speak english : Pave your own road to success

If you found this learn to speak english article helpful, there’s more to come your way! To stay on top of the Accent Pros news, follow us on Twitter, like us on Facebook, connect with us on LinkedIn, and Meetup. If you’re in need of Accent Pros’ services, try our free screening that shows you your accent severity on a scale of 1 to 7. We also offer both online and office accent reduction programs that have had at least a 50% or more accent reduction rate after 12 sessions.