Learn to Speak English: How are accents being used in advertising?

In the world of advertising, agencies always looking for the next big thing that will convince audiences to part with their hard earned money. As we have discussed in the previous installments of our learn to speak English, accents in advertising series. Cartoon and CGI animals have become preferred over human spokespeople, partially because it can be cost effective. Technology gives animated characters the ability to do things humans cannot. Most importantly, research has shown audiences respond better to animal characters compared to humans. Even though years have passed since the concept of a talking animal was first considered unique, there is still something memorable, about seeing a cartoon animal speak with a foreign accent.

Learn to Speak English: How Twitter Can Help Your Accent

Social media has dramatically altered the way people receive and respond to messages. Years ago companies could get by with having  one character or spokesperson represent a brand. An example include Pillsbury and the Pillsbury dough boy.  Social media has forced companies to appeal to as many people as possible. Those who learn to speak English have no doubt encountered Twitter and its use of the hashtag: a pound sign followed by a short phrase or group name.  Hashtags allow search engines to  scour through information and separate it into searchable categories, which are then grouped into visible lists of 10 as being the most popular topics on the internet on major websites like Yahoo. A fun activity to practice as you learn to speak English would be to get on Twitter everyday and see if you can pronounce the most popular trending hashtags.

Pillsbury hopes to appeal to active mothers and their children by introducing a character named Hans Strudel to promote  Toaster Strudels. The character’s German name and accent reflect the strudel’s German origins. In the following commercial the family looks at Hans in stunned silence until he says “Toaster Strudel ja?” The word “ja” means “yes” in German. The commercial closes with Hans giving the voice over tagline “Warm. Flakey. Gooey. Toaster strudel!” Above this is a banner that reads “Get Zem Going.” Note how the sound in the word “them” is represented with a z, as it would  be pronounced with a German accent. 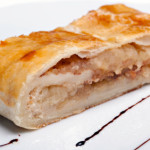 Pillsbury’s use of phonetic spelling in written advertisements and a stereotypical German accent for the Hans Strudel character indicates that they intend the accent to be a major selling point. While using television to learn to speak English, keep track of how many commercials feature a spokesperson with an accent, and of this number, how often the accent appears to enhance the appeal of a particular product.