Learn to speak English: How particular accents can lead to typecasting

When Hollywood producers and casting directors are looking to fill a role, they aren’t necessarily looking for a specific actor. Rather they are looking for actors and actresses who are best able to communicate what is written on the page to the audience, while also bringing an unidentifiable quality to the role that makes it their own. They inhabit the character in such a way that once audiences have been introduced to the character , it is impossible for them to see anyone else in that role. In storytelling there are a variety of clearly defined character archetypes that reoccur throughout stories regardless of the genre or medium in which the story is being told. Naturally some actors are more suited than others to play these archetypes and become associated with them in the mind of the viewing public. This in turn helps shape what is seen as the ideal form of an archetype character.

If you learn to speak English through repeating snippets of dialogue you hear on television, you’ll notice many actors primarily play a specific  archetype character across a variety of TV shows.

Foreign accents have become a sort of character archetype in themselves. Accents commonly serve three purposes in various forms of media: to distinguish foreign characters from American characters and to illustrate that their motives often run counter to the protagonists; as a comedic device, usually in a situation where a character is forced to adopt an accent or dialect they are unfamiliar with, which leads to an awkward situation intended to be humorous; or to enhance a character’s sex appeal. 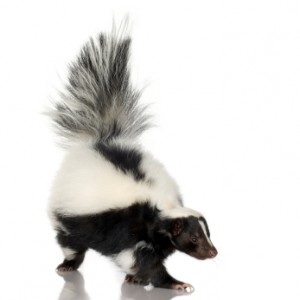 The stereotype connecting foreign accents with sex appeal has roots as far back as the first appearance of Looney Tunes character Pepé Le Pew,  a skunk with a stereotypical French accent, in 1945.

Like many TV characters with a foreign accent, LePew’s speech is a hybrid of his native language–French–and English malapropisms. As you learn to speak English you may notice that strangers and friends may ask you questions about your accent. Likely because your native accent doesn’t exactly sound the way it is portrayed in American television and movies.

A recent ad campaign for Nasonex allergy spray features the voice of actor Antonio Benderas as a CGI bee. The commercials closely follow the  Pepé Le Pew formula mentioned above, with Benderas  introducing himself to a flower via romantic soliloquy.

One of the fears people having when they first learn to speak English is that their accent will be too obvious to their listener, or  will eventually disappear completely. This is false. Your accent is a vital part of your identity and it isn’t our goal to make you speak in a way that feels unnatural.  We want to help you achieve a higher level of clarity when speaking regardless of the situation you find yourself in.