The Newfoundland Accent in Canada

The Newfoundland Accent in Canada

Newfoundland and Labrador have the collective distinction of being Canada’s most Eastern providence. The mainland Labrador and island Labrador are often described as being a single entity, despite the fact that nearly 92 percent of the providence’s total population of 526,702 lives on Labrador. Aside from their close proximity to one another, another fascinating part of Newfoundland and Labrador’s history is the Newfoundland accent. To the untrained ear, the accent is a seeming amalgamate that incorporates aspects of various dialects found throughout the world unto a unique whole. For instance, the Newfoundland accent is rhotic like American English, meaning the “r” sound is clearly pronounced in all words that end with the letter. Furthermore, the voiced and voiceless “th” sound is not present in many forms of the dialect. This sound is replaced by an equivalent “t” or “d” sound. This is not to suggest however that one can easily assign variations of the Newfoundland accent and dialect to specific areas. The dialect can vary across regions and from person to person. The ambiguity and dialect laden nature of the accent in this province is so profound, foreigners have been known to have trouble following casual conversations they’ve struck up with native Newfoundlanders.

Dialects can define a community

Newfoundlanders’ interpretation of the English language is filled with lively dialect phrases and sayings which may seem self explanatory at first glance, yet they often reveal more about the 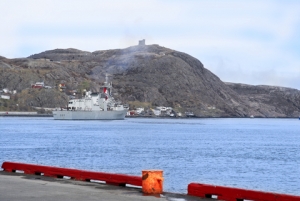 cultural identity of the providence than one could ever hope to learn from dedicated internet searches for relevant information. Newfoundlanders’ distinct lack of inflection while speaking has been the source of many crude and derisive jokes over the years. However the tourism industry is working to get the locals to embrace their manner of speech and frequent use of unusual dialect phrases, similar to CODOFIL and its desire to heighten awareness of the French language amongst Louisiana residents

Putting faces to the Newfoundland Accent

To this end, the tourism department of Newfoundland released a promotional video two years ago showing groups of Newfoundlanders talking to one another in various scenes. The narrator urges visitors to listen carefully and makes the claim that Newfoundland and Labrador collectively has “more dialects than any other place on the planet”. The video is seen as a powerful example of how a dialects can unify Newfoundland and communities in general, thereby making residents less self conscious of the Newfoundland accent and encouraging free expression in whatever local dialect they’re most comfortable with. By extension this enables residents to take control of their speech and not feel pressured to conform to a more formal manner of speaking. Along with the promotional video, a Newfoundland and Labrador Language Lessons video playlist was created on YouTube that features locals pronouncing specific Newfoundland dialect phrases, explaining the meanings behind them, and occasionally giving an example of the phrase in proper context. Some phrases include:

“I dies at you.”- Used in reference to someone the speaker finds immensely funny, the kind of person who can tell jokes and stories that elicit belly laughs with ease.

“Chaw bag”- A person who is prone to engage in relentless gossip about other people without regard for the social situation they may find themselves in or the person they’re speaking with. A chaw bag revels in the idea of spreading gossip no matter how emotionally damaging and has an insatiable need to know information regarding other people’s affairs.

This is just one of our many blog articles that help educate and inform the public on English Accent Training. If you’re interested in learning more about English accent training, check out our free Accent Reduction screening. Within 48 hours you will receive results regarding your accent on a severity scale of 1 (very heavy) to 7 (very mild) accent. If you’re looking to start on your English accent training, we have office and online starter program options! Within 12 English accent training sessions, all clients have demonstrated accent reduction of 50% or more.